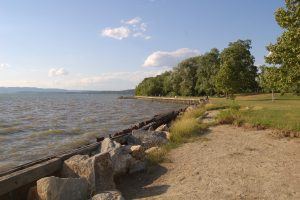 Croton Point Park is a closed landfill that contains a leachate collection system that conveys the captured leachate through a series of five submersible pump stations. Photo by David Brooks / CC BY

Croton Point Park is a 508-acre park situated on the east shore of the Hudson River in Croton-On-Hudson, New York. It offers year-round events and activities, and has facilities for camping, hiking and swimming. The park is also the site of historic wine cellars that are thought of be the oldest in New York State and the Croton Point Nature Center. A large portion of the park was originally a landfill, which has since been capped off and restored to green space.

The Croton Point Park Landfill began operations in 1927 and was closed in 1986. The closed landfill contains a leachate collection system that conveys the captured leachate through a series of five submersible pump stations, and eventually pumps to the Ossining Wastewater Treatment Plant.

The pumps, valves and appurtenances in the pump stations are exposed to aggressive landfill leachate and were nearing the end of their expected useful life. As a result, they required prompt attention. This rehabilitation project will help to ensure the continued reliable operation of the pump stations, and thereby enhances the health and environment of the residents of Westchester County.

A.G.V. Electrical Services LLC, of Wappingers Falls NY, won the bid for the project, which consisted of providing all necessary labor, material and equipment required to rehabilitate five below-grade pump stations located at the Croton Point Landfill. The work included the replacement of submersible pumps along with upgrades to all of the electrical and control systems.

A.G.V. Electrical Services LLC does only commercial work, with most of the projects being public work, bid work and heavy commercial. Typical projects include wastewater treatment plants, pump stations, correctional facilities and schools. The most recent is the Croton Point Park Pump Station Rehabilitation project.

“The project was very labor intensive because of all the PVC coated rigid conduit,” Pacacha states. “Electrical Bid Manager Pro (EBM Pro) played a big role in the success of the project. It helped me get the correct labor units, and was very accurate as to what our actual man-hours were. The estimating software also gave me the ability to break out each pump station separately and get the materials for each pump station.”

Pacacha has been using Vision InfoSoft’s Electrical Bid Manager (EBM) since 1999. Up until that time, he was doing all of his estimating manually. Then, one day, he was at a friend’s shop and he saw a copy of EBM. Pacacha called Vision InfoSoft, got a demo on it and immediately bought his first copy. Today, he has two licenses of EBM Pro, which is Vision InfoSoft’s most advanced estimating software.

“EBM saves me so much time and money,” says Pacacha. “Let me put it this way, the software allows guys like me to work out in the field and still get estimating done. Whereas, if I was doing the estimating manually, it would be a full-time job for me and I would have a junior estimator working next to me.”

According to Pacacha, the industry has changed considerably and is continuing to change. It’s becoming much more complicated. Doing electrical estimating by hand is slow, outdated and an inefficient use of time. Estimates done manually are often open to errors and inaccuracies. Pacacha says one of the best improvements to estimating and bidding is the development of software such as EBM.

“EBM Pro is very, very user friendly and extremely easy to use,” Pacacha says. “I can’t imagine doing estimating without it. One of EBM’s biggest advantages is that it integrates seamlessly with EPIC. I also recently started using PlanSwift, and it is a breath of fresh air compared to OnScreen Takeoff. Hands-down, you can’t beat it for the money. The ability to do a live takeoff between EBM and PlanSwift is great.”

Without hesitation, Pacacha states that EBM Pro has helped him win many, many projects over the years. He believes that every small to medium sized contractor should get the electrical estimating software.