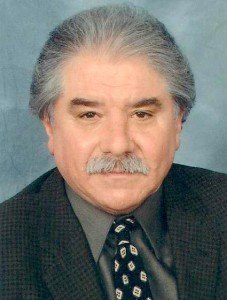 I’ve been estimating since 1970, and I had worked for a major electrical contractor in my area. I was in business for almost 30 years and decided to pull out of that – not because it wasn’t successful, but I had enough. I went to work for a couple contractors over the last ten years and then got back into just doing freelance estimating. I needed to be back in the game.

My first estimating software program was a company called DataTrak, and I loved it! This was a DOS-based program with a  material price update available from a well-known pricing service. DataTrak went out of business and didn’t follow up with Windows. When they did, it was too late. I used DataTrak until I could no longer get electronic pricing updates. I want to say it had to be 12, 13 years ago when I started looking for estimating software that reminded me of DataTrack. That’s when I bought Vision's Electrical Bid Manager. Before I bought, I looked at ConEst, Accubid and McCormick. I tried all of them; I needed to know what was going to do the job I expected. A few had a high learning curve. I wanted a system that was similar to DataTrak: easy to use, priced right, intuitive and a short learning curve.

My trial version of Vision's EBM sold me. Not only was the price right, but as I used it, I grew, and it grew to become a truly great estimating tool. As Vision InfoSoft developed it to the level that it’s at now, the other programs kept changing with new bells and whistles that really didn’t make them better, and in some cases, made them harder to use. They may look pretty and impressive, but that doesn’t mean it works better.

How We're Benefiting from EBM Now

It’s fast, and accurate and it’s easy to manipulate, if you want to manipulate the database. The others are kind of difficult to manipulate, especially something like ConEst. ConEst is very difficult to manipulate. They don’t have things like feeder set-up, or fixture set-up; everything you do has to go back into the database and pick an item up every time. For example, in EBM, if you pick 2? EMT for a feeder, it automatically gives you 2? fittings. You don’t have to search for them. Other systems give you multiple choices. You can’t set up a feeder, for example, or a bench circuit, as such. Where, with the feeder and branch circuit modules in Vision, you can set up a feeder or branch circuit model and go back to that over and over and use it again. ConEst, you can’t. 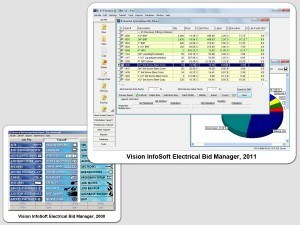 If the estimator knows how to manipulate and operate the software, that’s essential. Here’s the thing, most contractors are very low-tech. They get the software, they take a look at it, they don’t really know how to change the labor factors, they don’t put any effort or time to go into it and to really look at it. They bring other people into the office, they train other estimators or other estimators come in, and they don’t sit down and go through how to manipulate the software. So, as a result, they’re always factoring the labor at the end, or they’re adding stuff in because it’s too much of a pain. There’s a lot of guesswork with some of these systems, I will say Accubid is pretty good, very close to the way EBM operates, but it’s also very expensive, so it costs more. From the cost-effective standpoint, they’re paying more money for Accubid. Also what happens with some of these people: when they look at the software that seems impressive because the interface is pretty, it’s got a lot of colors and lines and things and doodads and widgets, they get impressed by that, because they’re generally very low-tech people, and they don’t look beyond that. So, they think it must be better just because all this effort was put into what it looks like. I get that, and I know you get that. I remember when we first implemented EBM in 2000, we bought it because of me, and a couple of project managers said, “Hey, look at this,” and I said, “Well, what’s the problem?” “Well, it’s not very, uh, pretty looking.” And I go, “Well, you’re not buying pretty, you’re buying something that works.”

When I was with a major electrical contractor in this area, we won a state 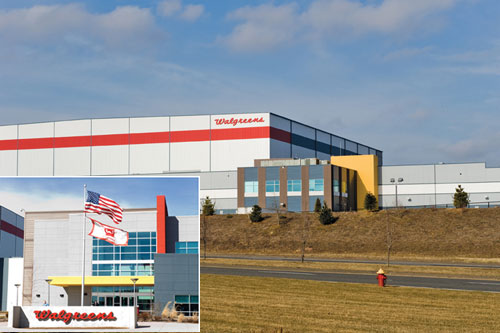 school that was over $8 million, and that was on EBM. Our success rate increased to the point that we bid $150 million in a year and backlogged $32 million under contract with $8 million undecided in offers of business. Not only that, but the same year I had the largest job I ever bid with EBM at $18.5 million and it was a Walgreen’s Distribution Center here in Connecticut. We did it with two people in five weeks. I will tell you this, because I used ConEst before: If we were using ConEst, the two of us would have never finished that; it would have taken us over two months to finish. ConEst is difficult to use, and I’m good at ConEst. I have friends of mine that I worked with and they used to call me Mr. ConEst because I was so good with it. But we couldn’t have done the job in the time frame that we did do it in. I’m not saying that our bid wouldn’t have been as competitive, I’m talking about effectiveness. In other words, productivity, getting the things done and getting it out and getting it ready. The name of the game is to bid as much as you can to become the lowest responsible bidder.

Our Advice for Estimators Seeking Software

You really need to take a look at it from a standpoint of not only cost-effectiveness, how much it costs you per station, but what’s it going to cost you in the ability to estimate more jobs than the other software that’s out there, when you have to manipulate the database? Again, knowing what ConEst was like, it was not easy to manipulate. I haven’t used it in quite a few years, but the last time I used it, when you got updates, everything you saved was written over. So, any assemblies that you saved, they were written over. At that time, we wouldn’t run their updates, because all of our assemblies got written over, and were eliminated. I don’t know if they’ve improved that, or changed that, but that’s the way it was.

Let’s put it this way: I’m a fan of you guys, mainly because it works. I’m not a fan of you strictly because of price, because if it was strictly price, I mean, you can always find somebody that’s cheaper that has a spreadsheet estimating system somewhere that would take forever to do. When you set up the database to accommodate your needs and use it, you can be sure that EBM won’t let you down. It’s is effective, it works. It’s easy to change, to manipulate. The database, everything it is, it’s fast. It’s intuitive. When I set things up, it just works. It really does; it saves a lot of time. Productivity is the key to estimating, getting the bid out. The deadline is around the corner and you need the job, plus the estimate has to be correct.

Ron Carrano has been an electrical contractor since 1970. He services Hamden, CT and surrounding areas.